I’ve now done all of the bits that are not 100% white. It’s slow, but not too frustrating. I might decide to take a break and do something a bit more colourful before I’m finished with this.

I recently found a new Finnish online toy store, Lelukatti, with a pretty good selection of puzzles, and since they had a sale on, I went a bit wild:

They also sent me some chocolate with the puzzles, a very nice touch!

I still haven’t finished Space Odyssey, although there are only 400-500 pieces to go. It will be some time yet, because I’m leaving for Dortmund tomorrow. Just a quick visit this time, I’ll be back in Helsinki late on Monday. Anyway, I thought I might present some new arrivals:

I wanted some more space themed puzzles 🙂 I think the Ravensburger uses some of the same artwork as Space Odyssey.

A couple of collages and cake!

The bottom one will be my first Otter House puzzle. I love the image, hope the quality will also be good!

I did a What If?-puzzle, and as usual you can find a photo of the finished puzzle on my Mystery Puzzle Page. The box is in French for some reason, although I ordered from puzzle.de. This was my third What If? puzzle, and in the previous ones, the puzzle basically showed almost the same scene as the box, just a few seconds later, but this was more difficult in that the entire setting was different. Only the people were the same, but they were wearing different clothes and doing different things. Anyway, we are asked to imagine what would have happened, if Marcel had lost the lottery ticket.

I went to the Borussia Dortmund FanWelt at the stadium yesterday to pick up tickets for the first competitive game of the new women’s football team on Sunday (they play Kreisliga, and the tickets are free). I almost thought I would get out of the fan shop without buying anything, but close to the exit they had two new puzzles that I had to get, of course:

The dark one will be really difficult, it says “Für echte Profis” (For real pros) on the box, and I felt challenged 🙂

An extra post about some new arrivals! My local puzzle shop Lautapelit.fi is still operating, although they don’t let people into the shop. They’ve moved the counter to the door, and you can pick up your order, or, of course, you can have your puzzles delivered, and that is what I did. They’re probably doing quite well, I expect 🙂

I was very happy to see that they’ve started offering D-Toys puzzles, it’s a good brand and very reasonably priced. They also have some nice images, don’t they? 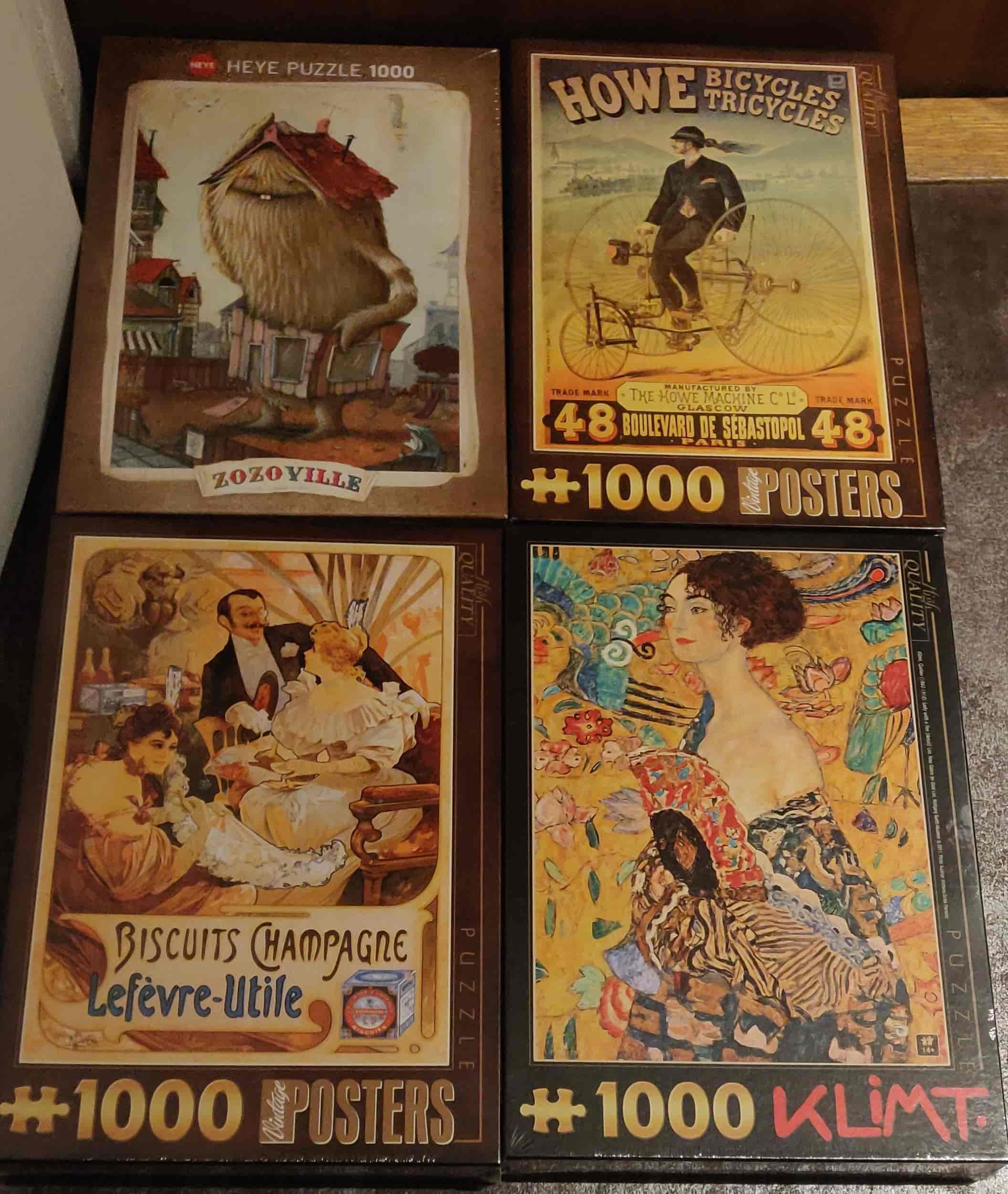 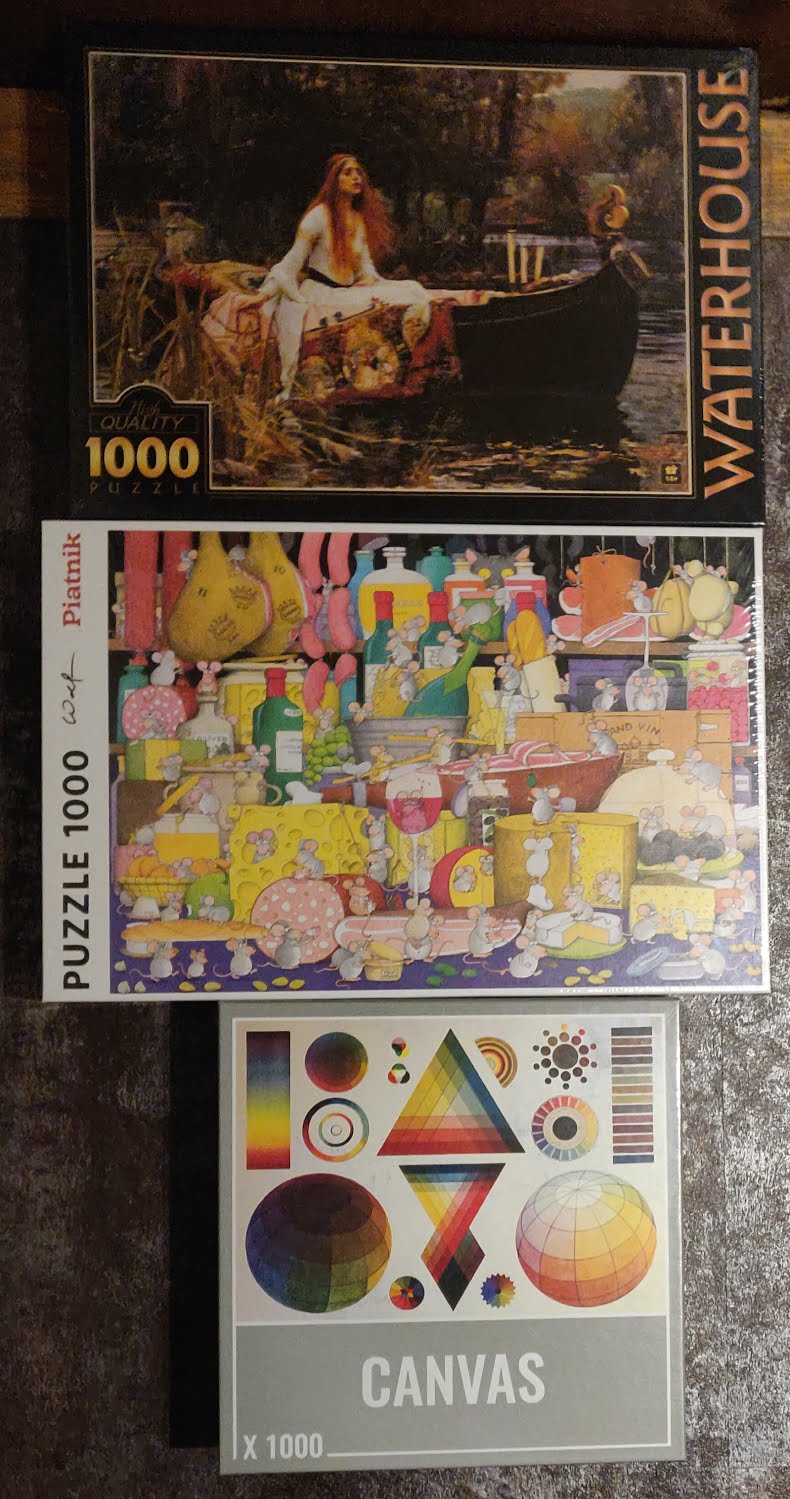 Heye has finally released their 2020 catalogue (the 2019 catalogue became available in November 2018), and there are some nice ones in there. I went to my local puzzle shop in Helsinki, and they already had some of the new puzzles. I got three:

There are two more puzzles that I absolutely must have, a new puzzle in the Inner Mystic series, and an adorable selfie monster from the Zozoville series: 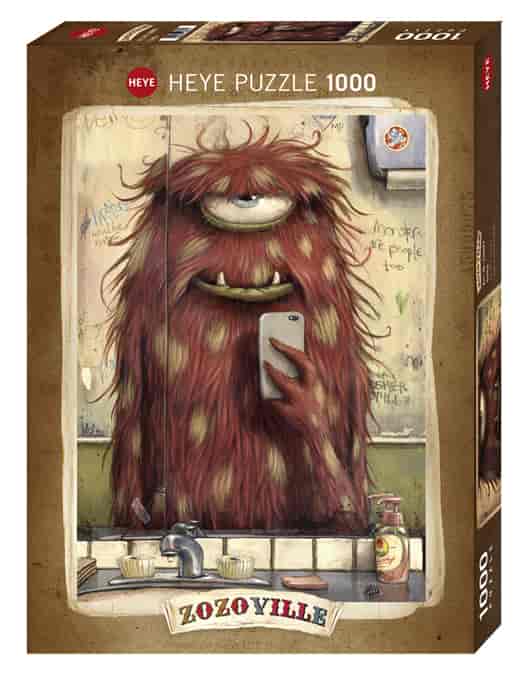 I’ve been shopping again, and I’ve bought my first vintage wooden puzzle! According to the seller, it’s from the 50s and about 1000 pieces. 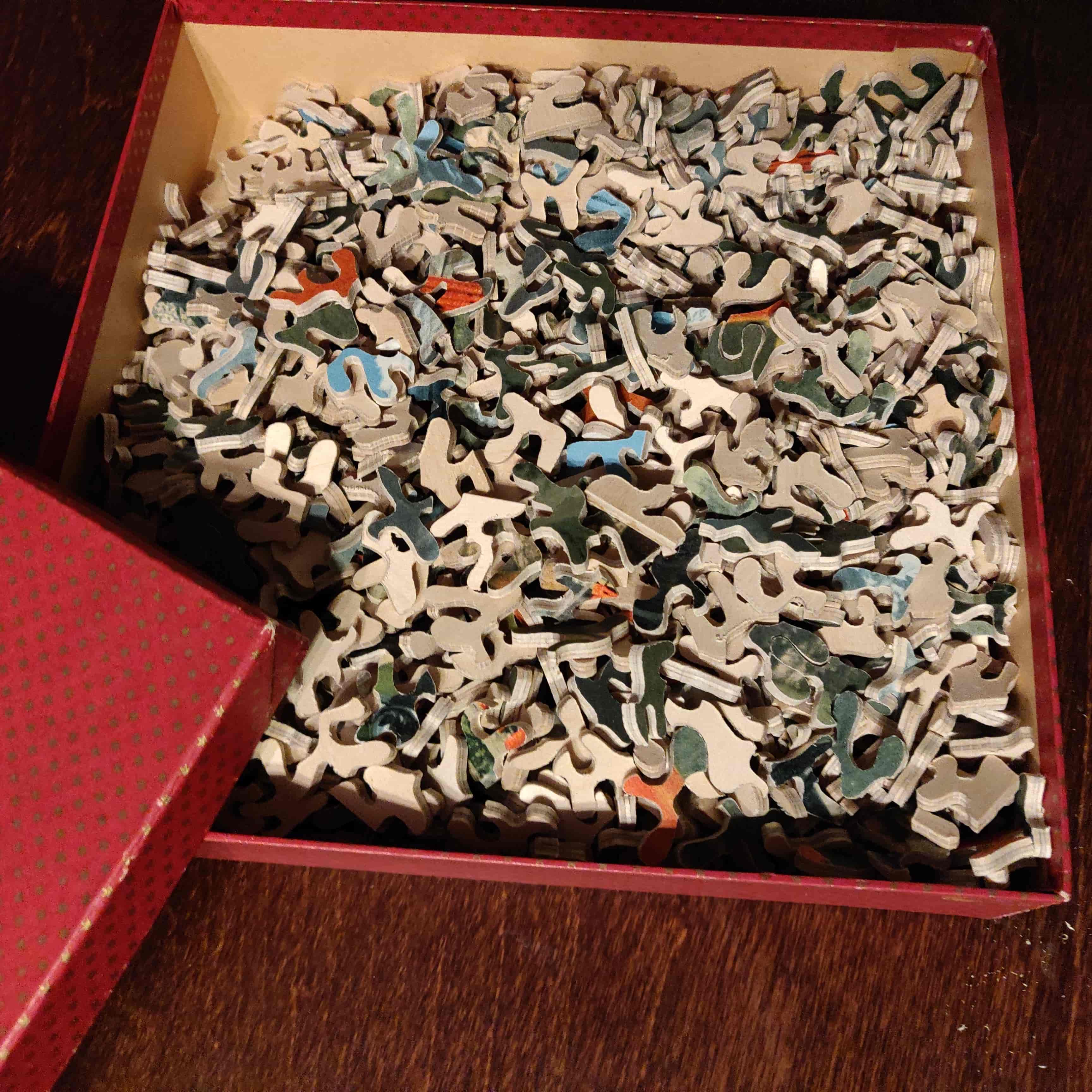 There is no image on the box, but the seller had managed to find this old travel brochure with the image of this puzzle (just the image in the middle, not the areas with text above and below). 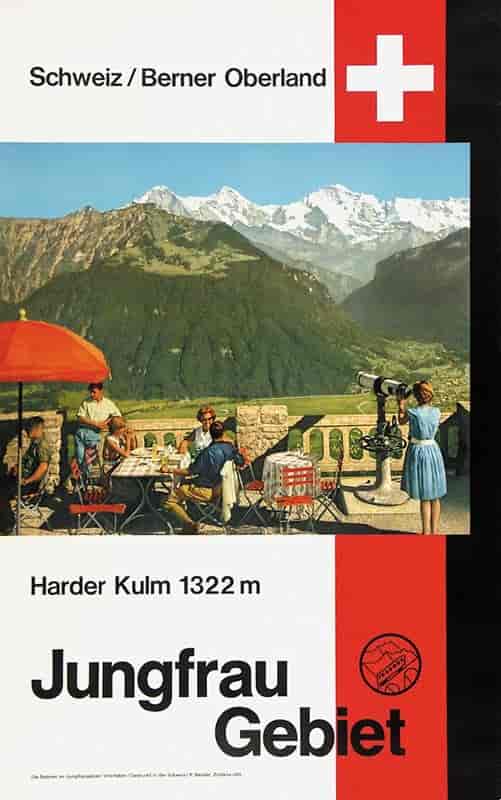 Not only is there no image on the box, there is no information whatsoever, except on the bottom someone has written in Swedish “We are enjoying the sun and watching the Alps with binoculars.” Which is exactly what the people in the image seem to be doing. There are also some numbers, but I have no idea what they mean. The text is very faint. This is going to be interesting! 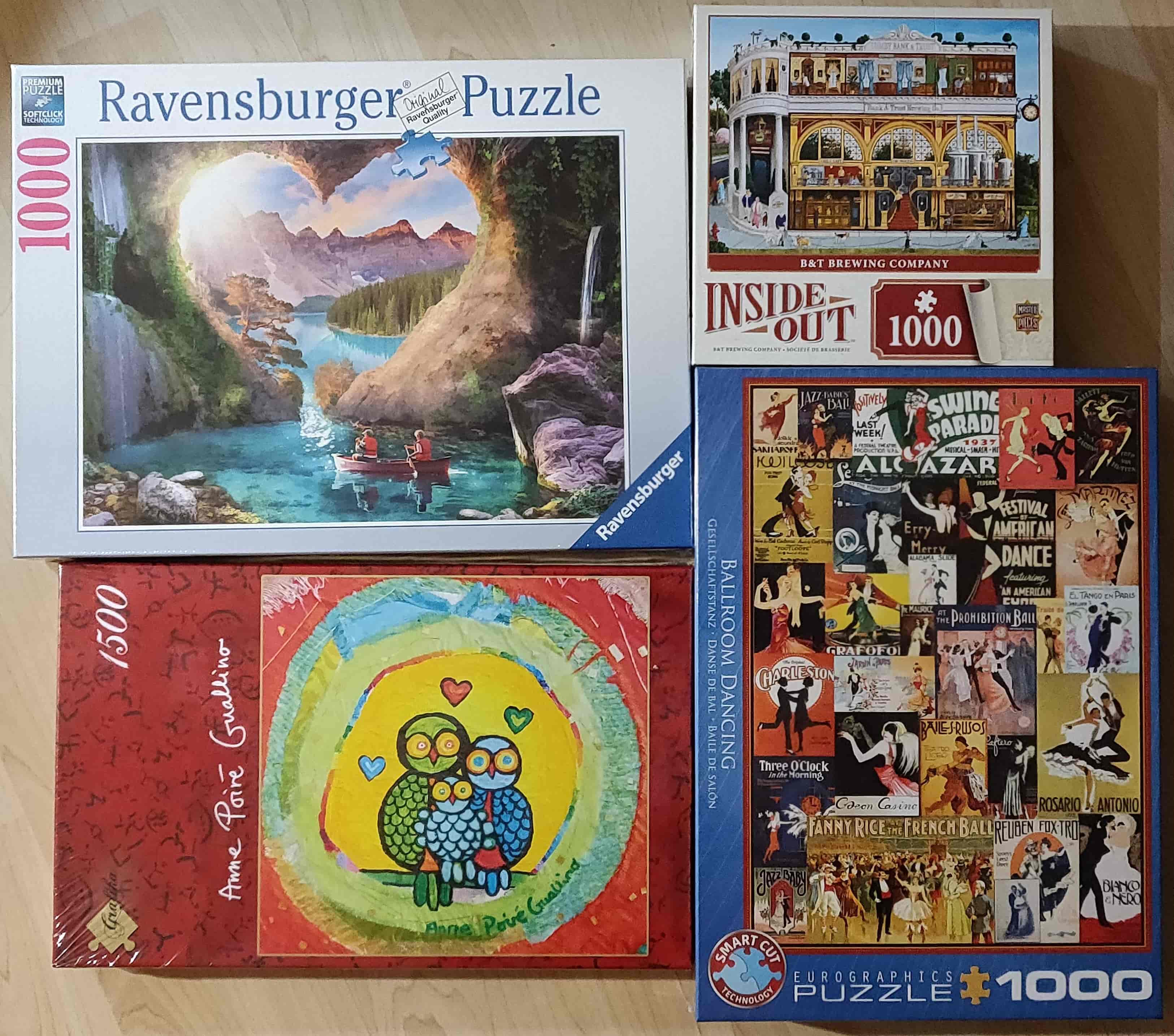 This I bought used. My efforts to quit Educa once again thwarted by an irresistible image 🙂 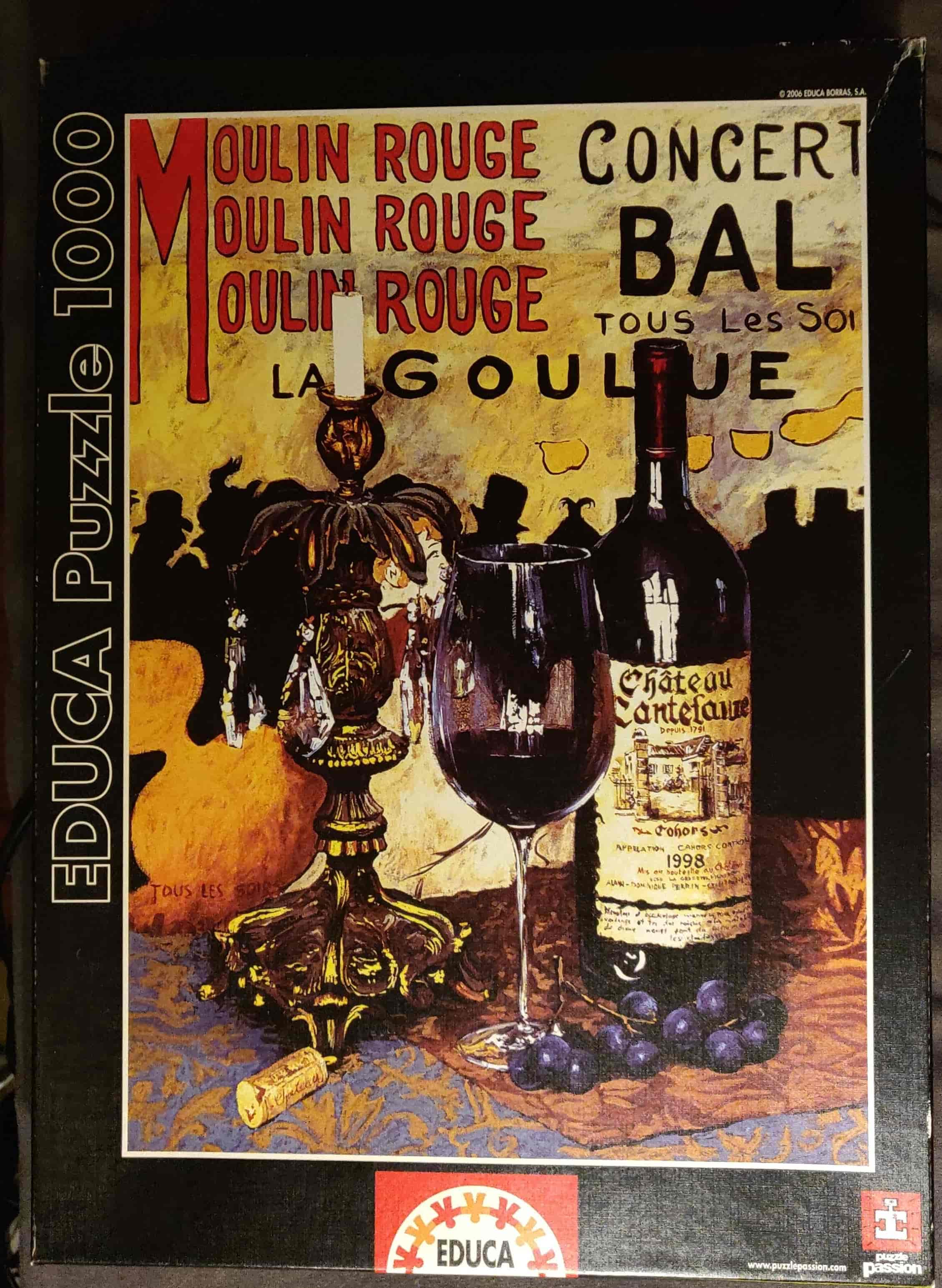 As you probably know, I’m desperately in need of more puzzles 😀 Which is why I again trawled the flea markets of southern Finland and came up with these. I’m especially happy with the Heye hearts-puzzle, I’ve been wanting to try one of those, and I also love the 1000 piece Clementoni. 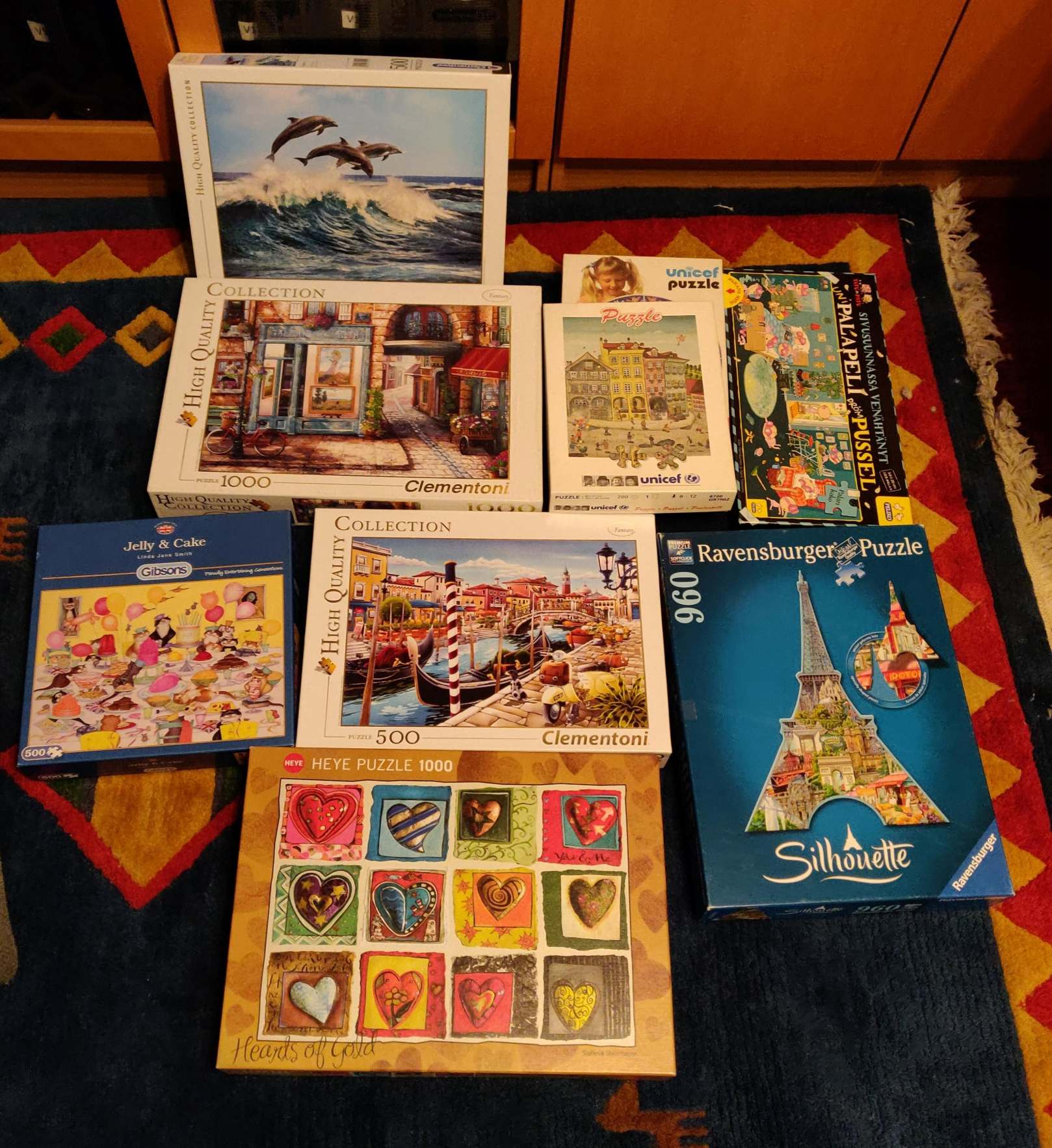 So, I wasn’t supposed to order any puzzles this summer, but then I saw that “And the Winner Is …” by Susan Brabeau is available again (first in the second row).  I’ve wanted this for a long time, but it’s been out of stock for a while now. There was also Gibsons version of this, but that was out of stock as well. There was a sale on Sunsout puzzles, so I grabbed a few more Brabeaus, and some other stuff as well … 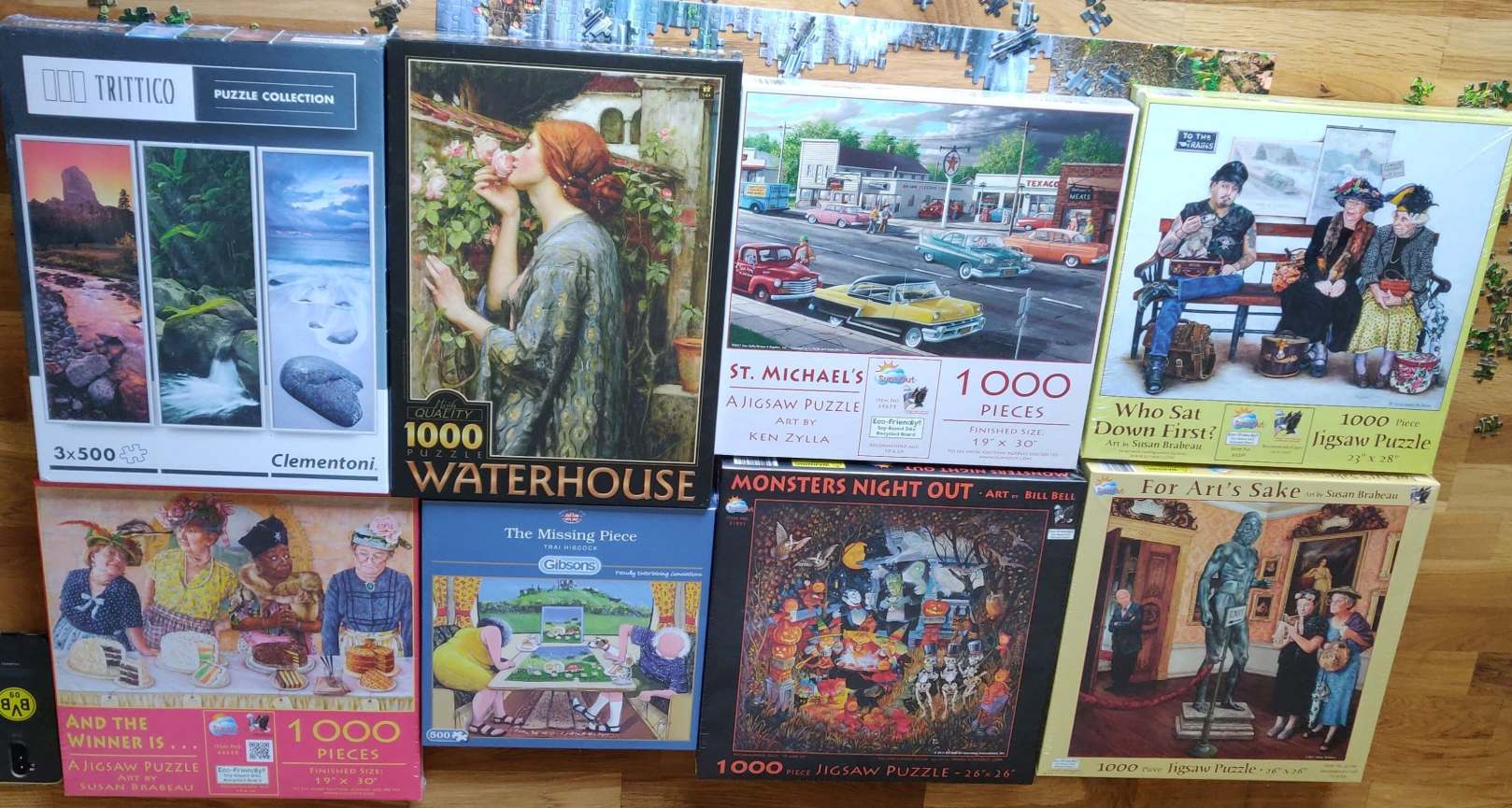 I found another Stenvall, only one missing until I have all 30 now! This one is called Secret Garden. 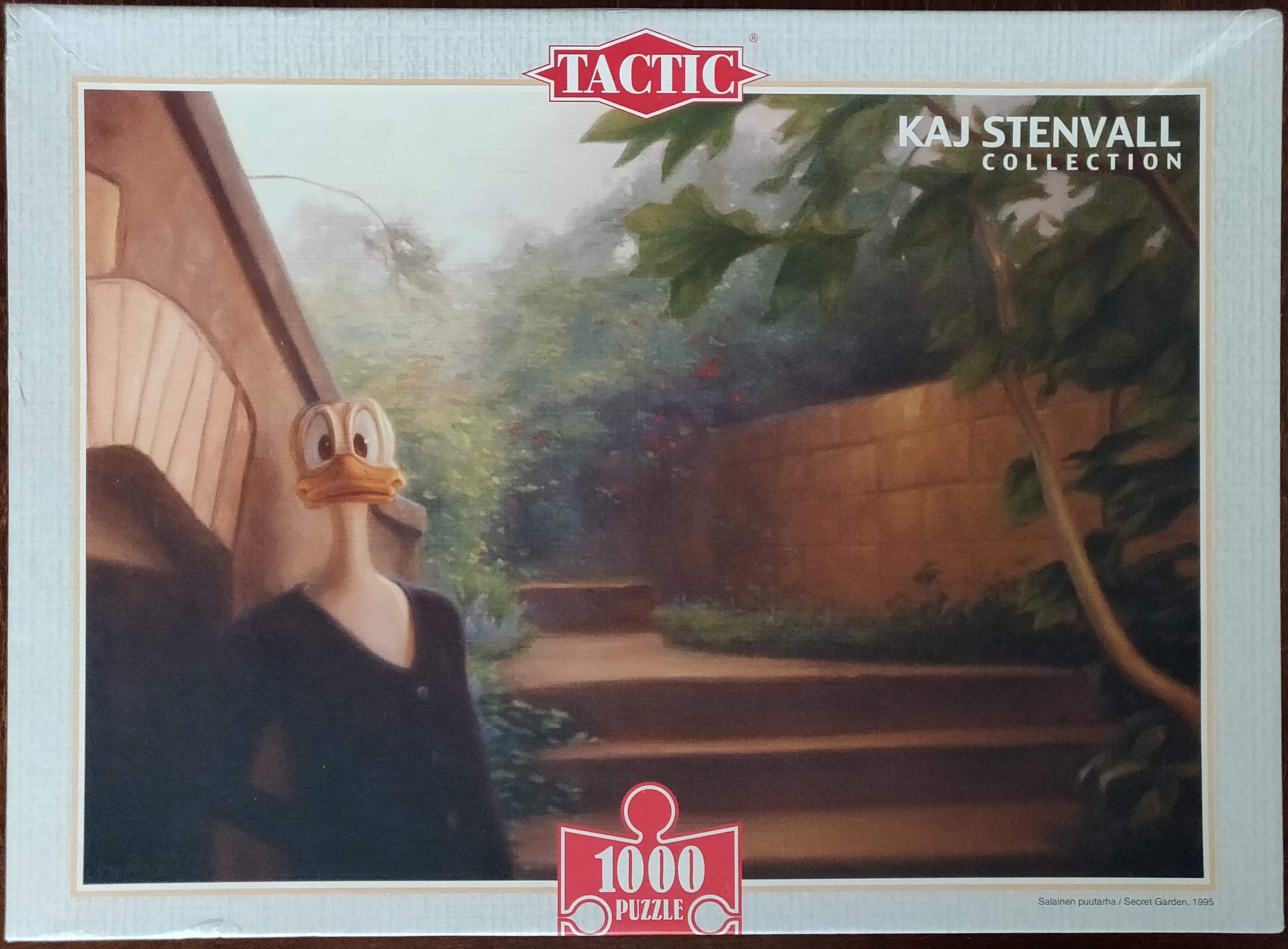 This was a bit sad, actually. The seller was a passionate puzzler, who can’t puzzle much anymore due to health issues, and she is slowly letting go of her collection. She wasn’t old either, younger than me, I think. I got two other puzzles from her, a 2000 piece Clementoni (Chuck Pinson), and another Tactic with a painting called Luxembourg Gardens, Paris from 1887,  by Finnish artist Albert Edelfelt.  I’ll be thinking of her when I work on these. 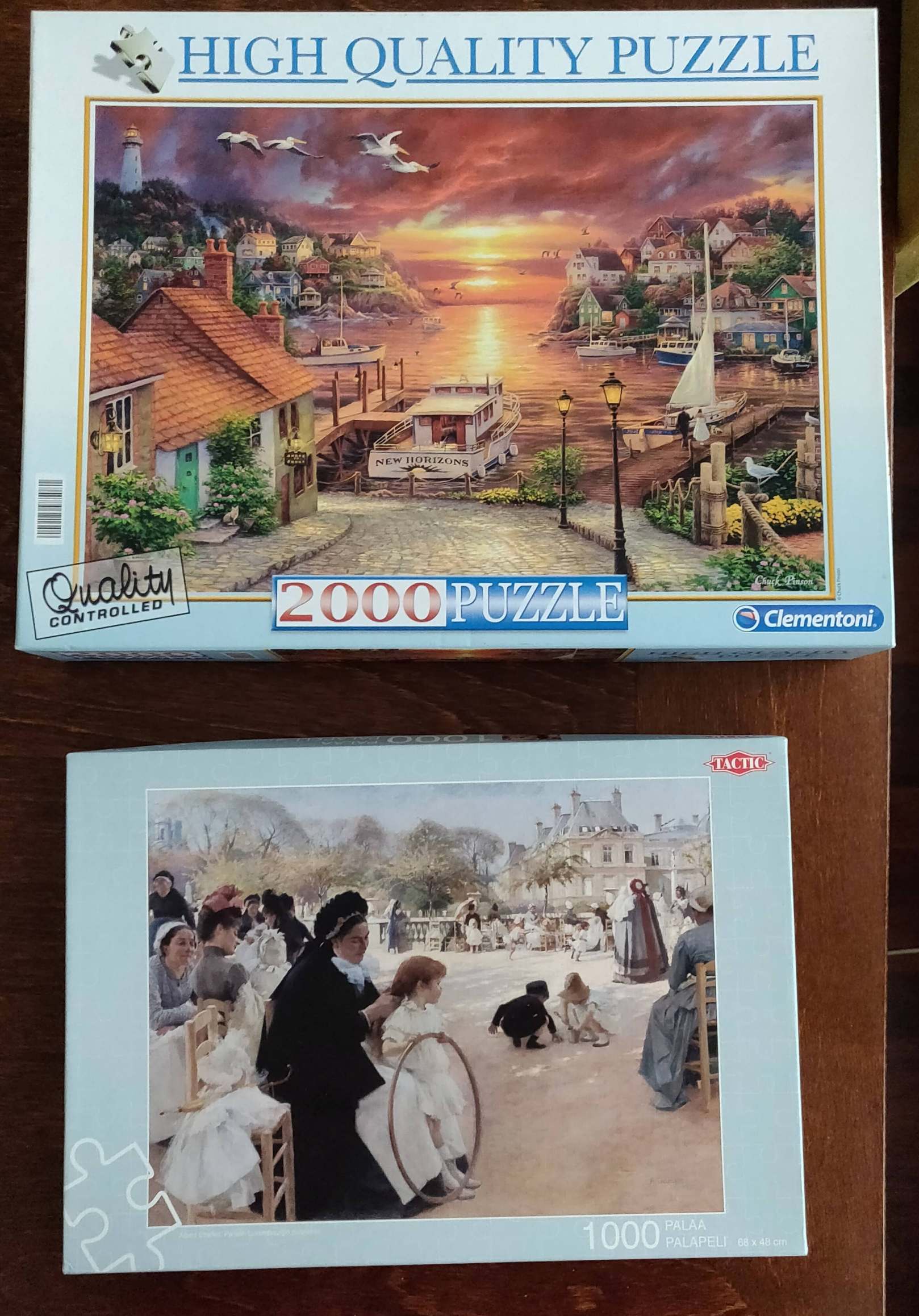 I found one more of the Stenvall duck puzzles, that’s 28 down, two to go! The last ones may take some time. 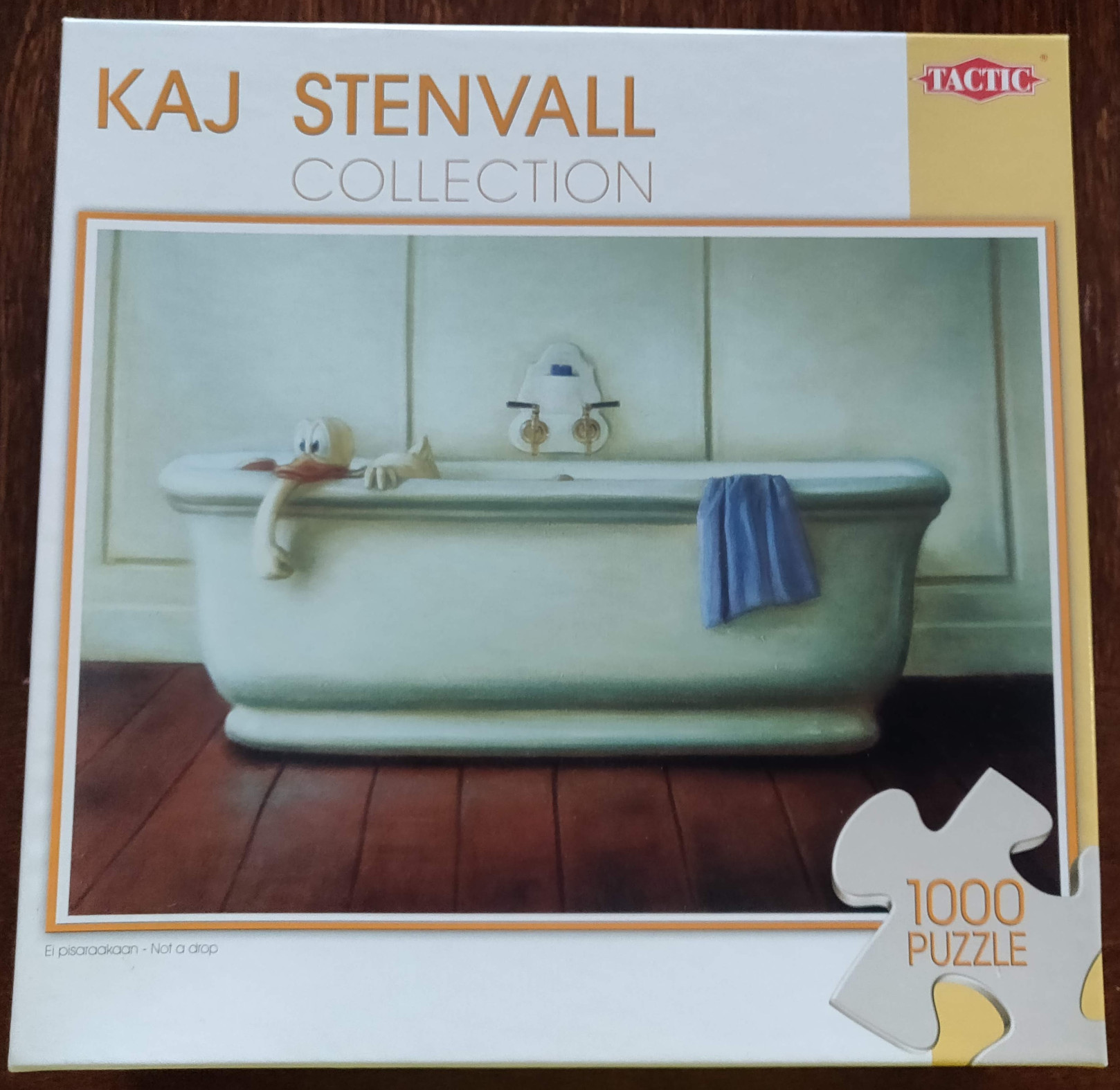 I’ll be out driving again for much of the weekend, but I’ll try to get some puzzling in as well!

I divide my time between my native Helsinki (Finland) and Dortmund (Germany), where my football team Borussia Dortmund lives. This blog is about my jigsaw puzzling activities in these cities.

Back to top
Puzzler1909
Blog at WordPress.com.
Loading Comments...